In elementary school, middle school, and high school, I wrote a lot of supremely crappy poetry. Most of it consisted of me being a smartass (“Ode to Yassir Arafat” and haikus about Star Trek), but I also wrote poetry about how I felt like my guts had been ripped out by friends and boys and splayed across Tennessee.

In high school, I made perfect grades on most of the papers I wrote. The admissions essay I wrote to get into American University was awesome (in my mind, anyway). I wrote about if we went into a nuclear war, it would important to put Britney Spears in a bunker for entertainment purposes. To keep humankind’s spirits up.

So I thought, I’m going to college and I’m going to dual major in Print Journalism and Creative Writer/Literature. I will ROCK at this.

Well…….I got to college, and I immediately started getting Cs on my papers.

I got scared I wouldn’t even pass first semester college writing. I ended up making a B. The first two literature courses I took? Interpreting Literature, and Writers in Print and in Person? Well, I barely pulled Bs. I didn’t seem to understand the materials in the ways the professors thought I should. (I remember rooting for Medea after she had killed her children to get back at Jason for cheating on her. That didn’t go over well.)

I thought… If I’m going to be some big time writer one day, I’ve got to get better than this. 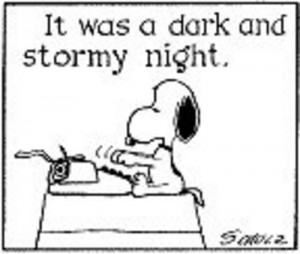 Second semester, I made a C in College Writing 2. I went to see the professor and she gave me some tips on how to vary my sentence structure and how to structure my arguments. Then she told me that most high schools these days don’t teach us how to write well. That really hurt my feelings.

I thought, “So everything I’ve learned up until now is USELESS?!”

Third semester, I took more literature classes, which I made Bs in. All my other friends were making As in their political science courses, and economics courses, and I was flailing around with my lame 3.0 GPA. I thought, “Who in the hell will hire me with this hideous GPA? No way will I get a job at The Washington Post.”

But then fourth semester, I finally got to take Creative Writing with Glenn Moomau, who is quite possibly one of the most badass people on the planet. For his class, I wrote a couple of really “out there” short stories – one was about some kids who played a prank that resulted in an old woman’s death, and the other was about rape, and he called me into his office and said, “Miranda, these are excellent. You should become a Southern Goth writer.” I also wrote some more soul-wrenching poetry (stuff about how I felt my life is a Black Hole or some shit), and he liked that, too. He said, “Everything you write is honest. Keep doing that. That’s what people want.”

I finally made my first A in a writing/literature class.

Of course, I made a B-minus in the other literature course I took that semester. At that point, I started to get scared. I was afraid I wouldn’t be able to have a comfy life or feed myself as a journalist. A second-rate hack journalist, at that.

I didn’t want to eat Ramen and Easy Mac for the rest of my life.

So I went to my friend Bob Nardo, and he asked if I liked any of my other classes. I told him that I enjoyed my International Relations courses (as I wanted to focus my journalism career on overseas development and communism and other interesting things). He asked what grades I made.

That’s when I realized I was making As in my Political Science and International Relations courses. I had a knack for that stuff.

I changed my major to International Relations and that summer, I applied for a job at the U.S. Department of State. They liked the grades I was getting, and they liked that I had “real-world experience,” meaning, I’d worked at restaurants and at camps and knew how to deal with people. This is an important trait to have in the diplomatic world!

I kept writing on the side. I remember toying with the idea of writing a non-fiction book about what it’s like to work for the government. I wrote a 45-page paper about how the U.S. should deal with North Korea. I wrote crazy rants and posted them on Craigslist, and got tons of laughs from people.

I started to believe in myself as a writer again.

And then I started writing my first novel. It was about politics. The book didn’t go anywhere, although four agents asked to read it – including Nathan Bransford, so that made me pretty excited. But no one wanted to represent it.

I felt miserable. I thought, “This is just like college all over again. I can’t write. I suck. I should go back to concentrating on trying to move up in the federal government.” 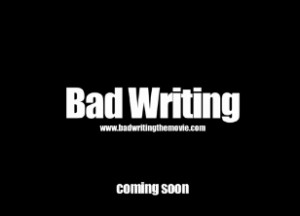 And then one day I started writing from the perspective of a girl football player. I wrote in free verse, and I didn’t hold back. I remembered what Professor Glenn Moomau said. “Be honest, and people will love it.”

And sure enough, Glenn Moomau was right. People did love the honesty and fun. And now SCORE will be published in December 2011 by Sourcebooks!

What I’m saying is this: Even if you make shitty grades, even if one project doesn’t pan out, keep looking for “who you are as a writer.”

I’d love to be the next Lev Grossman or Justin Cronin or Suzanne Collins, but I know that’s not going to happen. That’s not ME. Only I’m me, and I have to keep searching to discover who I am as a writer.

One thing’s for sure: I’m going to be honest.